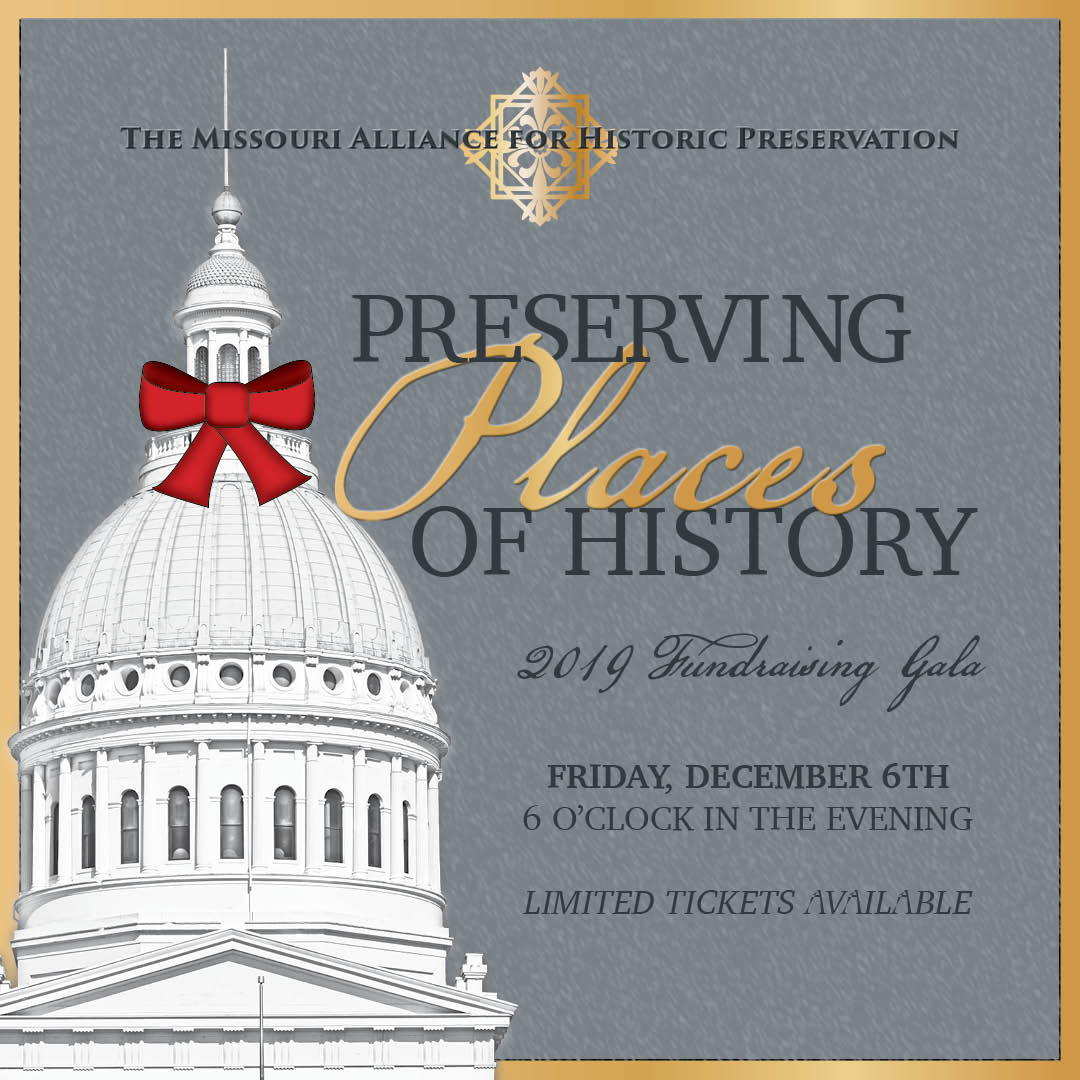 Raising Funds for Our Future

You can pass a building every day, but do you really know the history behind it? What thread does it weave through the tapestry of our state’s heritage? Join Missouri Preservation at the Old Courthouse in downtown St. Louis for an evening of history and appreciation of what our historic buildings can tell us. Chaired by local philanthropist Mary Pillsbury Wainwright and historian Mimi Stiritz, the 2019 Missouri Preservation fundraising gala recognizes the importance of Preserving Places of History.

The Old Courthouse, part of the newly re-christened Gateway Arch National Park, is well known as the site of the first two trials in the Dred Scott case, where in 1847 and 1850 slave Dred Scott sued for his freedom. In the 1870’s, the courthouse became the site of Virginia Minor’s case for women’s suffrage. Today, the courthouse serves as a reminder of the trials and tribulations in America’s fight for equality.

While the grand architecture of St. Louis’ Old Courthouse provides a backdrop which speaks of the seriousness of the law, as well as the precedents of ancient Greece and Rome upon which our laws were founded, in the Virginia Minor case, as well as in the appeals of the Dred Scott case, the judicial system failed to protect the rights of ordinary citizens. Thus, the building’s architecture forms an ironic counterpoint to the events which sometimes unfolded within its courtrooms….The example they set in small, seemingly unimportant cases in St. Louis, led to momentous events which changed our country forever.

Missouri Preservation’s goal of preserving place and community for future generations directly correlates with the educational goals of the Old Courthouse, Gateway National Park, and other historic sites around the globe — these places of history teach us about who we are. At Missouri Preservation we strive to help the lesser known places of history — the local places — and the individuals that support them. These places of history are just as valuable to the cultural fabric of Missouri and their continued preservation contributes to the enlightenment of future generations of Missourians.

Funds raised from the gala will contribute to our day to day activities of assisting individuals with preservation issues, keeping the public informed on what is happening with preservation around the state, and planning upcoming programs that aim to educate Missourians on how they can help with preservation efforts in their own communities.

The exhibit galleries will be open for the evening and guest will have a chance to speak with individuals involved in the courthouse and Arch improvement project. Tickets are $150 and include hors d’oeuvres and an open bar, provided by Butler’s Pantry.

Tickets are limited and can be purchased at the link below.

Special thanks to our event sponsors