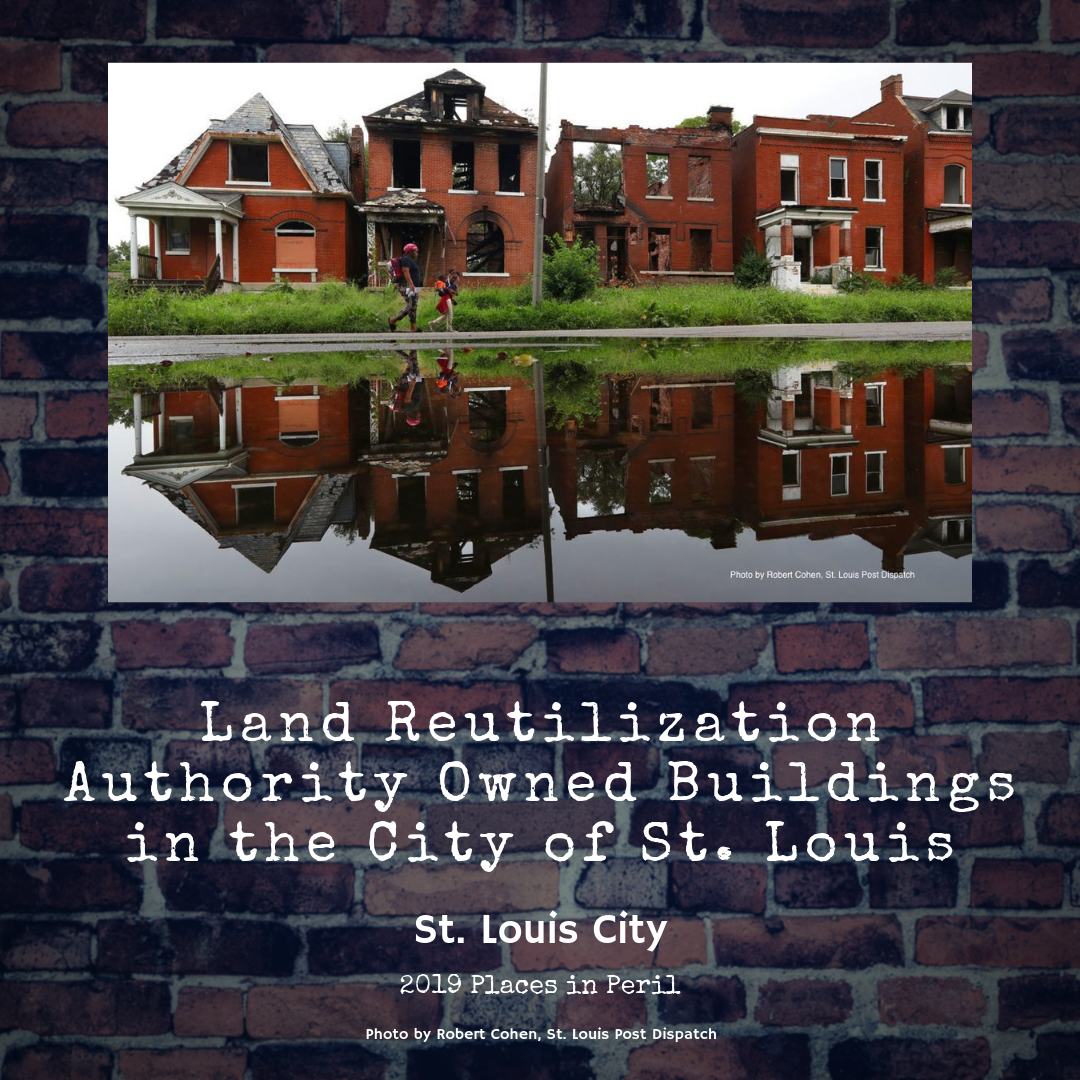 The Land Reutilization Authority (LRA) in the City of St. Louis owns over 11,200 parcels of property. LRA estimates that there are approximately 6,200 buildings on these various properties, both commercial and residential, constructed between 1870 and 1950. Many are located in local or National Register historic districts, and even more if surveyed might be determined eligible for historic district listing. Most of the LRA’s holdings are located in distressed neighborhoods due to a large number of tax foreclosures, so it is possible that LRA will end up owning more potentially historic buildings in the future. LRA’s major policy of disposition of these buildings each year has been ad hoc demolition, presenting a major threat to preservation of the vernacular architecture of St. Louis. The St. Louis Metropolitan Sewer District (MSD) is currently in its third year of funding the demolition of LRA-owned buildings in North St. Louis, where the District is spending a planned $13.6 million per year over twenty years to demolish 1,300 vacant buildings, creating passive storm water retention spaces in place of buildings. In South and Central St. Louis, MSD plans to separate storm water from city sewers, but in North St. Louis has chosen the cheaper route of simply creating storm permeable land by removing the buildings. Furthermore, the City of St. Louis increased its annual demolition funding through a ballot initiative, spending about $1 million annually on building demolitions. Two recent efforts to combat demolition-only policies have recently been passed. One calls for selling vacant houses for one dollar to citizens who would make one of these buildings their private residence for five years. A recent court decision also allows the City to issue $6 million in bonds each year to fund stabilization for weather-proofing of historic and vacant buildings held by the LRA, representing the first-ever stream of funding for protection rather than demolition of these buildings. With the guaranteed prospect of increased urbanization in our nation and state, extant buildings show far more potential for contributing to the economy and quality of life than vacant land. Unimproved property values are low, while improved property with buildings yield the highest promise of tax revenue. Currently LRA lacks to funds to market for-sale properties, but the promotion of dollar houses and stabilization efforts are great preservation tools. It is hoped that this listing will amplify the cause for further change and also announce to preservationists the need for citizens to step up and purchase LRA buildings. Never before have there been these tools to aid with preservation and counteract demolition policies, and now is the time for people to take advantage of them before we lose thousands of great buildings.

Help the LRA owned buildings by writing their office and encouraging stabilization instead of demolition! Emphasis should be placed on the sale of the buildings, not their demolition.